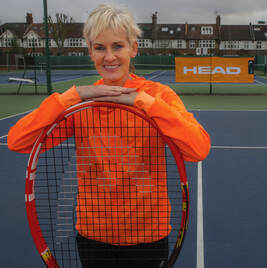 Miss-Hits founder, Judy Murray
Judy Murray is the former captain of the GB Fed Cup team (now named the Billie Jean King Cup), and has been a tennis coach for over 20 years. She’s best known for being mum to Wimbledon champions Jamie and Andy Murray, but she also holds 64 Scottish titles herself. Plus, she’s internationally recognised as one of the world’s best skill developers in young players.
Judy believes there should be more female tennis players and coaches, and so she created Miss-Hits to make the sport more welcoming and exciting for girls aged 5 – 8. As a member of the government’s Women in Sport strategy group, Judy is thrilled that Miss-Hits has increased the number of female coaches.
Away from sport, Judy’s a big fan of musicals, Strictly Come Dancing, darts, cakes, and weeding – yes, weeding!